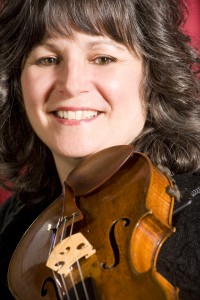 Violinist Anne Robert is renowned for her “sensibility, warm sound, dexterity and elegant phrasing” (The Strad Magazine, London). She enjoys an active career as a chamber musician and regularly plays in Canada, Europe, Asia and the United States. First violin of the Orchestre symphonique de Montréal for twelve years, she is a member of the Trio Hochelaga, which she founded in 2000. Anne Robert also gives recitals with organist Jacques Boucher and was artistic director of the Maison Trestler Summer Festival for seven years. She has created “Continuum”, an artistic and medical project which supports people with genetic susceptibility that can lead to cancer.

Anne Robert’s discography contains more than thirty titles which reveal her vast and varied repertoire and her particular affinity with French post-romantic music. Among those recordings are some first editions of works by composers such as Dubois, Tournemire, Huré, Lazzari, Vierne and Migot. She regularly gives masterclasses and serves on juries, notably for the Montreal International Music Competition and the Tibor Varga Competition (Switzerland). She was awarded many grants from the Canada Council for the Arts and has the ongoing support of the Conseil des arts et des lettres du Québec and of the Conseil des arts de Montréal for her different artistic projects.

She received the highest diplomas in interpretation from Indiana University, the Royal Academy of Music of London and the Conservatoire de musique de Montréal. Her teachers were Josef Gingold , Manoug Parikian and Taras Gabora for the violin and Menahem Pressler, Janos Starker, Gyorgy Sebok and Otto Joachim for chamber music.

Renowned pedagogue, she teaches at the Conservatoire de musique de Montréal and at the International Summer Academy of the Orford Arts Center. She plays on a 1738 Carlo Antonio Testore violin.

The work of violinist Anne Robert is a model in every aspect… a generous and touchingly sincere performance.
Le Devoir, Montréal, Canada

Anne Robert is a consummate artist who performs with a delicious sweetness of tone, elegance, and compelling lyricism, complemented by rhythmic precision tempered by freedom, infallible intonation, and technique aplomb.
The American Organist, USA

Miss Robert played broadly and stylishly, she made much of the passionate sentiments of the Adagio mesto and cantered through the high spirited Finale with confident panache.
Financial Times, London, England

The performance by Anne Robert, a fine musician with an established career, is both convincing and lively.
Le Devoir, Montréal, Canada

A coherent performance, full of verve and excitement in the fast movements… a frank and resolute approach.
Le Soleil, Québec, Canada

[…] The violin playing was spectacular. Robert captured her audience from the very first note with her rich, deep tone. She played with authority and total conviction, and the audience was entranced by both the richly complex music and the performance.
Guelph Mercury, Ontario, Canada

[…] Interesting and stylish recital. There was an admirable balance between a classical awareness of form and vivacious and on-going romanticism.
The Birmingham Post, England

Altogether, a winning performance of music that never fails to please.
The Gazette, Montréal, Canada